If you plug an USB device into a Linux box that uses a current distro, udev dynamically creates an entry in the /dev directory. You can list all currently available USB units with the lsusb command:

The device file created by udev is: /dev/bus/usb/002/003
(Yes, these are the bus and device numbers shown in the lsusb output).

The default permissions are rather restrictive:


Only root can read and write to the USB device. Anybody else only has read access.

In order to retrieve the stored GPS info from my GPS logger (e.g. by using itrackutil), I have to instruct the device to send the data. In order to send this command I need the write privileges.

I could start itrackutil as root, but from a security standpoint that is not what I want.

This problem usually arises only, if the USB device is not (yet) managed by the system, because part of that managing process is... changing the permissions.

The first step is to create a group named usbusers (or any other name), then make yourself member of that group and instruct udev to set the device group id to usbusers and set the permissions accordingly.

On the command line, creating a group and adding the user (e.g. mike) is quite simple:


If you pefer the Gnome GUI, you find the appropriate program under "System - Administration - User and groups": 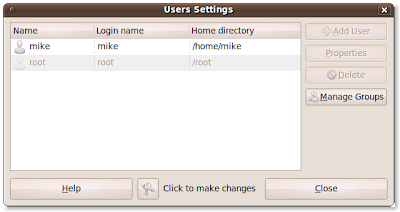 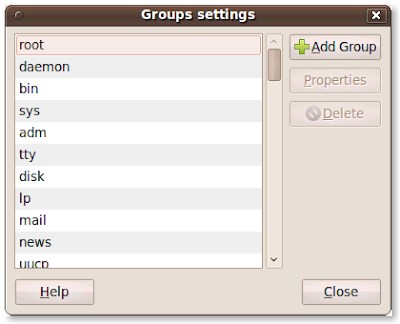 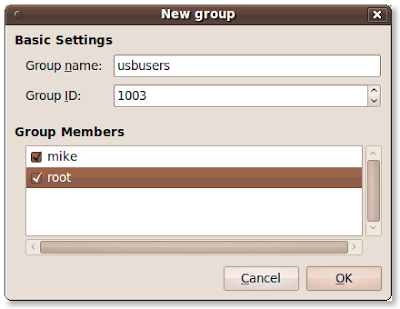 Make enter "usbusers" as group name, make sure that the group id suggested by the system is not zero. It's usually in the 1000+ range, enable the "Group Members" and click "Ok".

As a last step you have to create a new udev rule:


Save it under the following name: /etc/udev/rules.d/45-xaiox.rules

Two remarks regarding the filename:
If you now plug-in your usb device, the permissions look like this:


And being a member of usbusers, you have read and write access.
Eingestellt von Michael um 22:36 1 Kommentar: 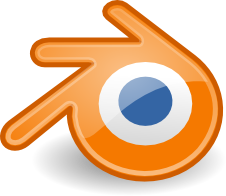 Now that I got Blender 2.5 alpha 0 running on my old laptop, I noticed that when rotating what must be the most deleted cube in the 3D world, the refresh rate was very slow. An update rate of 2 or 3 times per second makes the program unusable.

Granted, the laptop is not very fast, but in the old version of Blender (2.49a) the cube followed the mouse movement without any visible delay.

Having seen Blender using OpenGL without hardware acceleration before, I tried pressing one of the OpenGL buttons down in the "header" of the 3D window:


This produced the error: "Failed to create OpenGL offscreen buffer".

Something was wrong with the use of OpenGL.

User teeth in the developer IRC channel #blendercoders on freenet.org, suggested to change the user preferences from "Triple Buffer" to "Overlap". 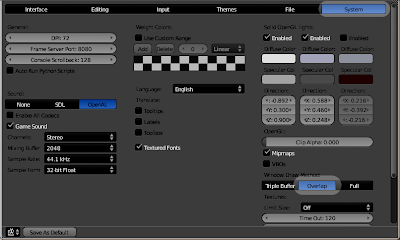 You can display these settings using "File - User Preferences" or Ctrl-Alt-U. Then select "System" and look for the "Window draw method".

Don't forget to "Save as default".

It worked here. If you have the same problem, it's worth a try.
Eingestellt von Michael um 01:17 Keine Kommentare:

Bug 446632 is responsible for the segfaulting blender on start-up on machines with ATI graphics cards running Ubuntu Karmic.

Analysis showed that the segfault originated in the mesa library. The code of the mesa contains the OpenGL implementation under Linux, and is used by Blender and various other programs.

During the pre-release process of Karmic, various builds of the mesa package have been made and are still available online. Tests showed that the last build without the bug was 7.6.0~git20090817.7c422387-0ubuntu8. The next one was 7.6.0-1ubuntu1.

To determine which patch between those two releases is responsible for the bug, a process called git-bisecting is used. For this, you give git the id of a version with and without the bug. Git chooses a version in the middle. You check it out, compile it and test it. After that you tell git if this version was good or bad. After that git chooses another version halfway between the last good and the first bad one. This process is repeated until you find the bad commit.

Sounds simple enough.... but it raises the following questions:
Within the Ubuntu project there is no git repository that describes the way from 7.6.0~git20090817.7c422387-0ubuntu8 to 7.6.0-1ubuntu1. Therefore we use the upstream git repository at git://anongit.freedesktop.org/mesa/mesa (browseable: http://cgit.freedesktop.org/mesa/mesa) on which the Ubuntu version is based.

The last commit of the 7.6.0 branch in this repository has the label mesa_7_6

The way to compile the source is described later in this post. As you will see, packaging is not necessary. The compiled drivers can be used directly.

You need git-core - and also download gitk (which is not really necessary, but makes a nice graphical representation).

choose a directory and download the entire repository (in this tutorial I use my home directory).


This will create the subdirectory mesa, and a subdirectory .git, that contains the content of the cloned repository.

Be patient. After counting the elements to be transferred it takes some time before the actual download begins. All in all around 100 MB.

The code that we are going to compile needs some additional source files:

Further preparations
make clean removes the "debris" from previous compilations. But we haven't created any yet... Do it anyway - it's good practice :-)

./autogen.sh verifies that all prerequisites are met. If anything is missing, it will complain.

./configure sets up what is compiled, where and how.

During the tests remove -O2 (under CFLAGS). This disables compiler optimisations. The resulting code is a bit larger and a little bit slower, but it is easier to use during debugging.

--with-dri-drivers="..." determines which drivers are compiled. As the original bug only affects ATI machines, we only need the drivers we use. That saves a lot of compile time. If yours is not among them, check out ~/mesa/src/mesa/drivers/dri/ and add it.

You can find out which driver you are using with:


We could enter the entire ID, but the first few digits are usually sufficient.

make should finish without errors. Now we start Blender using:


LD_LIBRARY_PATH and LIBGL_DRIVERS_PATH make Blender (and only Blender, or any other program you specify) use the just compiled libraries. No need to reboot or to restart X. No effects to the remaining programs.

Please note, that you may need to replace the radeon part of the driver path with r200 or r300 depending on the driver you use.

We now officially start the bisecting process:
... and tell git that this was a "good" build.


Checking out the bad build

As we can not pinpoint which git version corresponds to first bad Ubuntu build (7.6.0-1ubuntu1) we simply start at the newest commit in the mesa_7_6 branch:

This replaces the files in the mesa directories and its subdirectories (except .git) with the new ones.

We compile it:
and test it:

This time Blender should crash. We notify git:

With this command, git chooses a commit approx. in the middle:


As an interesting side note, the driver from this commit does crash Blender, but not with a segfault. There is even an output on the console: "drmRadeonCmdBuffer: -22".


Ackowledgements
Tormod Volden for creating and updating https://wiki.ubuntu.com/X/BisectingMesa and various other info.