Here is a small Blender add-on to change the seed value for the Cycles render engine automatically before rendering a frame.

The seed value determines the noise pattern of a cycles render.

If you only render one image, this is of no concern for you.

If you render an animation, you get the same pattern for each frame which is very obvious for the viewer.

To counter this, you can enter #frame as seed value (creating a so called driver) which returns the frame number as seed value. This gives you a different noise pattern per frame which makes it look like film grain. 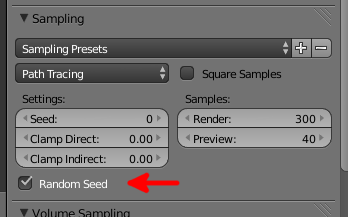 This obviously only works if you have an animation to render, but not with a single frame.

After installing the add-on you see an additional checkbox in the render samplig panel where you can switch this feature on or off.

Why to go the trouble to write an add-on for this?

Lately I have used image stacking a lot.

This technique allows you to reduce noise in pictures created by Cycles rendering engine by rendering the same frame multiple times - provided you change the render seed. You then can calculate the "average" of these pictures (e.g. using ImageMagick) cancelling out some noise.

If you want to a clearer version of an image that has just rendered over an hour, you save it and render it again, then stack the images. This is much faster than scrapping the first image and re-rendering it with a larger sample count.

After forgetting to change the seed value a couple of times, the level of suffering was high enough to make an add-on. :-)

How to "average" PNG files with ImageMagick

In a recent post on CgCookie Kent Trammell explained that you can improve the quality of a Cycles render by rendering the image multiple times if you use a different value for the sampling seed. 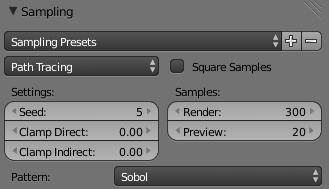 In his case those images were calculated by different computers of his render farm.

But the same is true, if you waited for an hour for a render to finish, and you are pleased with the image except for the noise.  In this case save the image, change the seed value and render it again.  This way the first hour was not in vain.

In any case you will end up with one or more PNG files with look similar except for the noise pattern which changes with the seed value.

If you calculate the mean image of these images the noise level will be reduced.

Kent Trammell showed how this calculation can be achieved with the Blender node editor (his math was a bit off, but the principle is sound).

The same could be accomplished with other programs like Photoshop or The Gimp or command line tools like ImageMagick.

The ImageMagick command for doing this is:

However, if you try this with PNG files that contain an alpha channel (RGBA) the result is a totally transparent image.

In this case use the option "-alpha off", e.g. like this:

A final note: Keep in mind that all images will be loaded into memory during this process - i.e. you want to limit the number of images.
Eingestellt von Michael um 01:28 Keine Kommentare: