I have installed Lift and Scala on a Linux computer running the current Ubuntu version 10.04. Depending on your distribution, the commands may be different.

What you need is:
Note that this is not the only possible configuration. There are other project management tools like SBT and other servlet engines, e.g. Tomcat. However, the documentation I've seen mostly describes maven and jetty.

Please note: The following step will install Scala. It also lets you run Scala commands interactively from the command line. This is a very good learning tool, especially for beginners.

This is a modified version of the instructions given by the London Scala User Group Dojo:

The version of Scala used for compiling the web app is stored in the maven repos and is at the moment (Juli 2010) at version 2.8.0.RC7. It will be downloaded and executed during the build process.

Ubuntu comes with OpenJDK as standard. You might want to download the official Java from Sun... I mean Oracle:
Installation of maven2 and jetty

Go into an empty directory an issue the following maven2 command: 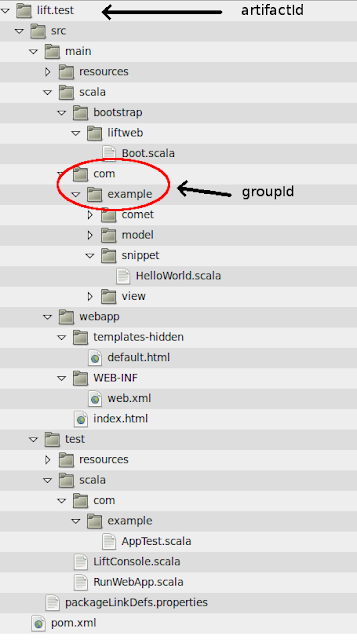 This might look scary at first. But there are only 10 files.

I'm not sure yet about the last group. My guess is they are used for unit testing and packaging of the WAR files for later deployment.

As for the first group:
Some folders are currently empty:
model, view, comet (in ./src/main/scala/com/example/).

In the example code I have seen so far, Scala code that defines persistent data structures (e.g. for a database) is stored here.

Bringing your application to life

In order to start the application change into the top directory (lift.web) and type

After maven has finished downloading all dependencies and building the application, you can access the web application in your browser via http://localhost:8080
Eingestellt von Michael um 00:49 Keine Kommentare:

A recent show of Floss Weekly made me curious about Lift, a web framework using Scala.

“Scala is a general purpose programming language designed to express common programming patterns in a concise, elegant, and type-safe way.” so they promise  on the Scala website.

Lift, like any framework that you haven't written yourself, will take some time getting familiar with, and Scala, well, it's just another computer language... or so I thought.

Perhaps the most important feature of Lift is its template system.  These templates are strictly XML based text files without any programming logic.  Tags within the template link to functions in your Scala code that generates some output.  This output (also XML) then replaces the tag.  After a few more processing steps the result is returned to the enquiring web browser, your page gets rendered, end of story.  Yes, there are lots of support features within the framework – like html form generation, database connectivity, page access control – but this is the basic principle of Lift.

The designers of Scala cherry-picked the best features and concepts from other programming languages, some object-oriented stuff but they also borrowed heavily from functional programming. Its mantra: “everything is an object” and “if it's worth saying, say it with a function”.

Scala's smart compiler can in most cases infer types of variables, so you don't have to declare it manually.  The language has lots of these simplyfications, dramatical reducing boiler plate code.  However, you have to be familiar with these in order to be able to revert the expression back to its more verbose form, otherwise you will scratch your head when you encounter the “Scala smiley”:

( _ + _ )
Some language constructs help you avoiding Null pointer dereferences, or to catch all possible cases in a matching construct.  And being a statically typed language  the Scala compiler will be very stubborn if your types don't match.

You can write very elegant code – even though I wouldn't call deeply nested function calls simple to read, at least not yet.

Letting the compiler infer types looks like a good idea.  On second sight, it also means that you need a good memory or at least a helpful IDE.

is simple and easy to understand. (The literal 1 is an integer, i.e. “a” must be integer as well). But:

does work just as well. And now you either know the types or you have to look it up.

The possibility to drop dots and brackets in some situation lets you further “simplify” things:

becomes a much more friendlier
(+ is a valid function name in Scala).

Another nice feature: When defining a class how often have you assigned the values from the constructor parameter list to class variables for later use? It's usually the first thing you do.  In Scala this is done automatically.  Why hasn't somebody invented this earlier?

There is documentation available for Lift and Scala on the web.  While perhaps not exactly light reading, they will get you started.

For Scala http://programming-scala.labs.oreilly.com/index.html from O'Reilly is a good start, and on the Scala website there is http://www.scala-lang.org/docu/files/ScalaByExample.pdf.  Both publications expect that you have done some programming before.

For Lift you should check out master.pdf from http://groups.google.com/group/the-lift-book/files. More information is available at the Lift Wiki and a subscription to the Lift newsgroup is also recommended.
Eingestellt von Michael um 23:56 Keine Kommentare: